A 25-year-old woman from Wroclaw, Poland, has gone blind in one eye and lost sight in the other after she got her eyeballs tattooed black.
The woman was, reportedly, inspired by rapper Popek, who also has the whites of his eyes tattooed black.

Aleksandra Sadowska complained of pain in her eyes after the tattoo was done, but she was reassured by the tattoo artist that this was a normal reaction and that she should take painkillers until it was healed. According to local reports, though, the tattoo artist is now facing criminal charges for using body ink to tattoo skin that is too dangerous to be tattooed and is now safe for the eyes.

The woman’s lawyers say that the tattoo artist did not know how to perform such a delicate procedure, and yet he decided to do it anyway.
Aleksandra lost complete sight in her right eye, and she was told by doctors that the damage was irreparable and that she will probably lose sight in her left eye too.
She told local media that doctors do not give her much optimism for improvement as of now, as the damage is too deep and extensive and she’s afraid of becoming completely blind.

Aleksandra’s appeal began four years ago, and the tattoo artist is only now facing charges for his mistake. He continued to run his salon up until this point, and he has pleaded not guilty to the charges.

The news for Aleksandra’s blindness comes after a 24-year-old woman from Australia suffered the same issues after having her eyeballs tattoed blue. 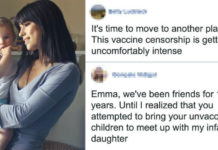