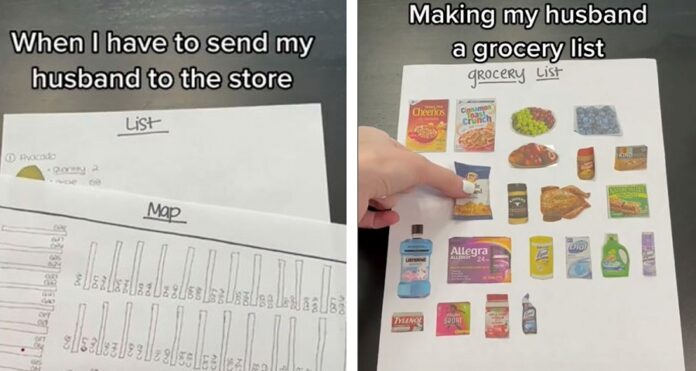 Adam and Melinda are a married couple that share the popular TikTok account Adam x Melinda. They recently uploaded a few videos, however, that sparked quite the heated debate on the Internet. But what was it about? Well, the videos showed Melinda writing out a grocery list that named the items she wanted her husband to pick up at the store, but besides the items themselves, the list also included prices and a photo of what each item looks like and how much it costs so he doesn’t get confused.

She went one step further and drew a map of the store itself, marking the exact locations of the products.

The video has since been viewed more than 21.2 million times, so it’s safe to say that it went absolutely viral – and you can check it out below.

A few days later, they released a follow up video:

The videos gained a lot of popularity and started a heated discussion on ‘performative incompetence’. Among all the responses, one stood out, and it was from a man that goes by the TikTok handle NotWildin. In his response, he elaborated on ‘performative incompetence’, and why he believes husbands (or men, in general) are at fault here for exaggerating their own incompetence and exaggerating their own incapability to force the labor onto their partners.

This is how other people reacted to Adam x Melinda’s videos: