Jurnee is a 7-year-old biracial student that had their hair cut by a classmate and a teacher in two different incidents. The father, Jimmy Hoffmeyer, has since moved his daughter to another school. He told the Associated Press that his daughter came home one day with her curly hair cut to her shoulder on one side. According to the girl, a classmate used scissors to cut her hair on the school bus.

The father said that he made a formal complaint at the school, and his daughter’s hair was finally made symmetrical at a local salon. Two days later, however, the girl arrived home with her hair cut again – but this time by the library teacher. As it turns out, the teacher cut her locks all the way – without permission. The dad said that the girl was crying and she was afraid of getting in trouble for getting her hair cut.

“I asked what happened and said, ‘I thought I told you no child should ever cut your hair,’. She said, ‘But dad, it was the teacher.’ The teacher cut her hair to even it out.” – the dad noted.

This is assault. The precedent was confirmed a few yrs ago when Amish men were attacked & had beards shaved. It was ruled that the cultural significance of beards (comparable to Ms. Journee’s hair) ruled the actions a hate crime & the ringleader got 15 years I believe…

The dad spoke with the school’s principal, and was told that the librarian wouldn’t receive a punishment. Following the incident, the dad filed a report with the Mount Pleasant police and received a call from the Mount Pleasant Public Schools superintendent. He has since stated that he’s not trying to make things about race, but many people have since commented on the ideas about black people’s hair, including the idea behind white people’s adjudication regarding Black hairstyles.

The dad has since filed a $1 million lawsuit against Mount Pleasant Public Schools, the librarian, and a teacher’s assistant, arguing that the incident regarding his daughter has led to her constitutional rights being violated. The lawsuit was filed last week in federal court in Grand Rapids, and alleges ethnic intimidation, intentional infliction of emotional distress, assault, battery, and radical discrimination.

Many people said that the incident was ‘an assault’ with legal precedence.

Lesbian Couples Share How They Decided Which Partner Would Conceive 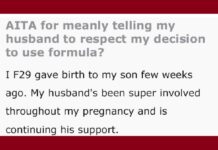 New Mom Accused By Husband For Choosing Formula Over Breastfeeding

ABOUT US
Women's Rights News is Facebook’s most prominent Women's Rights page and LGBT News is one of the largest LGBT pages on Facebook. We promote and advocate an array of topics from global gender equality, feminism, gay rights, body positive & acceptance, reproductive rights / pro-choice, women's health, SHEroes, human rights, gender pay gap and so much more. We value the opinions and comments of each and every one of our fans. All people are valid and have a voice. We are all empowered differently we do not shame. We are body positive, ALL bodies are beautiful. Speaking of bodies - My body - My choice! We encourage education. To contribute content: WomensRightsNewsbm[email protected] & [email protected] Follow us at: www.facebook.com/WomensRightsNews & www.facebook.com/NewsLGBT
FOLLOW US
© Gucmakale.com 2019
This website uses cookies to improve your experience. We'll assume you're ok with this, but you can opt-out if you wish.Accept Read More
Privacy & Cookies Policy