Nadia is a mom from London that claims she gained more than 50 pounds after the birth of her first child. So, she made it her mission to take off some of the baby weight, and she started taking weight-loss classes. During the classes, she learned a thing about portion control, and she eventually managed to return to her ideal size.

However, her 6-year-old daughter Shifaria was targetted by peers in school and started called her names like ‘chubby’. It really broke Nadia’s, heart, so she decided to do something about it.

Notably, though, instead of rounding up the parents of the kids that bothered her daughter, the mom began monitoring her daughter’s weight by putting her on the scale every single day. She recently shared an article with The Sun in which she said that she decided to help her daughter with her weight and her self-esteem. While she can’t control what her friends say about her, this was the least she could do. So, whenever those kids told her that she was chubby, she reassured her that she wasn’t, and she’s always telling her that she’s beautiful.

However, be weighing her every day, she’s also keeping an eye on her ‘puppy fat’.

The mom shared that she did the same with her eldest, too, and her older daughter is now slim and has lost her ‘puppy fat’ weight.

Nadia is a firm believer that the daily weigh-ins won’t leave a negative impact on her kids, but her technique was criticized by hundreds of internet users around the world. What’s your take on this one? Should you weigh in your children daily, especially at the age of 6? Feel free to discuss it in the comments! 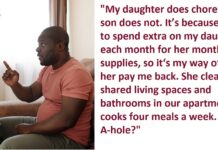