Remember the ‘dad bod’ trend that took the internet by storm?
It followed after an article named ‘Why Girls Love The Dad Bod’ went viral back in the day, and it imposed that women prefer men with the so-called ‘dad bod’.

And while there’s nothing wrong with women loving guys with any kind of body, the problem with the trend was that it praised men for gaining a bit of weight, but still discouraged women, putting the pressure on them to look perfect. If they happen to be moms, the pressure is still on them to ‘lose the baby weight’ and look amazing (not that we don’t look amazing regardless of our weight anyway!).

Well, a woman named Rachel Whipple recently decided to call out the sexist double standard that the ‘dad bod’ puts on women in a TikTok video. In the video, she brilliantly broke down why the ‘dad bod’ trend is very unfair to moms, and you can check it out for yourself below.

Rachel’s video gained a lot of popularity and it racked up more than 1 million views! Thousands of women supported her in the comments and thanked her for sharing the message that needed to be heard! 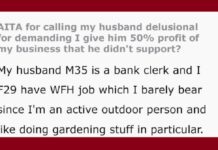