Home Women Man “Scientifically” Mansplains Why Guys Have To Manspread The term “manspreading” is a term specifically invented for the phenomenon that women know all too well: when a man takes up extra space in a seat on a train or a bus by spreading his knees as far apart as possible. Yeah, to make room for his nuts.

Even though I think I speak for all of us, women, when I say that we absolutely hate it when guys “manspread”, one dude on Reddit tried to give a very “scientific” explanation for why men “have to manspread”. Oh, he included diagrams and everything. As you can see, “it’s all about geometry and physiology”. Men’s narrower hips don’t allow their less-flexible legs to cross as easily, and it, obviously, means that they have to spread their knees as far as possible and block other people from sitting down. The mansplainer wrote that men are, on average, taller than women, and that gives them a higher center of gravity, which narrows the balance triangle. Oh, he added that you “subconsciously seat yourself into a stable position while sitting on a moving bus, and the taller you are, the lower you have to position yourself in the seat to stay balanced – and spreading your legs helps with the balance triangle”.

We don’t know if this guy was for real or he was just trolling, but we can assure you that there are guys out there who believe this bs to be true.

Women Share Their Worst ‘That’s Not How Women Work’ Moments 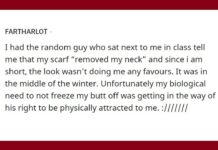 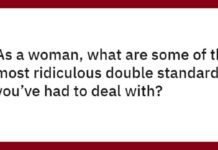